This is going to be a double pack based on the advertising characters (so of course it’s going to be in the ad icons series) from Jollibee, which I’d never heard of, but it turns out that it’s the biggest fast food chain in the Philippines (although I […]

Who here hasn’t seen the classic film Warriors set in the 70s showcasing New York (fictionalised) gang warfare. It’s a great movie and had an equally great computer game, which deserves some pops. I think that even though it’s a cool franchise and the pops are really great […] 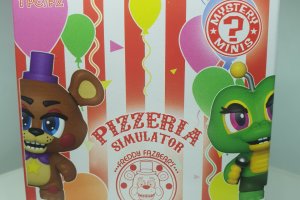 Why do we Nerds Love a Mystery Box so Much?

This is a question I have asked myself since I first attended a comic convention, because these things are everywhere and I swear each time I go they get even more plentiful… There are almost as many stalls selling some kind of mystery box or blind bag as […]

From 11 am PST, available on the funko online store (so for US citizens only) will be this incredibly cute chupacabra pop figure. There’s not really much more to say about it, other than that it’s from their Myths range and is disturbingly cute! Photo property of FUnko, […]

Kid Robot are perhaps most well known for their iconic Dunny figures – actually the very first vinyls which we ever purchased many years ago – I must review those old figures one day actually! However they also have a lot of other great styles which stay true […]

Mezco are bringing out a 10″ figure of the Lord of Tears character the Owlman, and it looks absolutely incredible – as with just about everything which Mezco are producing these days to be honest! The figure is set to hit the shelves in May – July 2020 […]

What is a Funko Pop Figure?

How to Display your Funko Pop Collection

How Many of Each Funko Pop Figure are Produced?

Jumanji: The Next Level Review